SouthWest Counselling Centre » About us

Southwest Counselling Centre has been providing counselling in Kerry since 1994. The centre offers a low cost affordable service. We have a large team of counsellors offering both short term and long term counselling. Counsellors at the centre are accredited with either IACP and IAHIP or are working towards their accreditation. 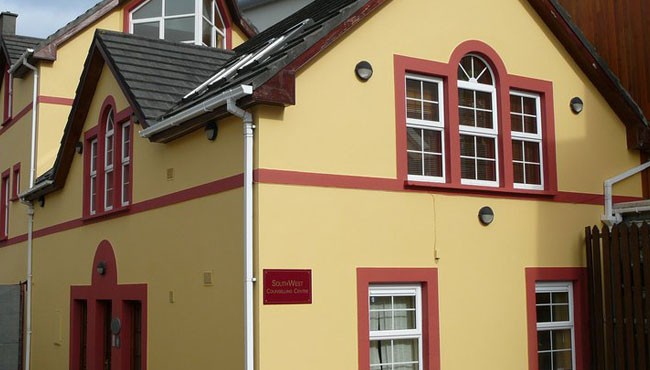 History of the centre

Southwest Counselling Centre Ltd (incorporating Killarney Counselling Centre) was established in October 1994 as an initiative of the Franciscan Friary under the direction of Br. Niall O’Connell, who saw a need for counselling services in the local community. The service began in one room in the friary but within three years had developed to such an extent that a purpose –built centre was erected on land given on lease by the Franciscan community. Thus in October 1997, a staff team of seven moved into the new centre. In 2003 a further extension to the centre was completed.

This extension incorporated three additional counselling rooms, one family room, an office and staff room. In October 2003 the centre changed its name to Southwest Counselling Centre to reflect more accurately the extent of services being provided now and in the future. This name change was launched by Mary Coughlan, Minister for Social & Family Affairs. In December 2003, President Mary McAleese officially opened the new extension.

Throughout this time, the service has continued to provide a reduced cost counselling service with qualified counsellors in a confidential caring environment.

Securing sustainable funding remains a challenge for the Centre. Our Board of Management are committed to lobbying government departments and other funding sources in order to ensure the long-term survival of the Southwest Counselling Centre.

SouthWest Counselling Centre would like to thank Muckross Craft Centre and Garden Restaurant for rai...